Keep Browsing
Home › Journal › How To Tell If You’re As Fast As Pantani
Share:

How To Tell If You’re As Fast As Pantani

Was in a meeting with some good friends that I work with the other day and we were obsessing about the weight of a new product they have coming out later in the year. It’s 4-ounces or a little over 100-grams lighter than the nearest competitor’s. So we started getting into how important 100-grams is. Well, if you’re a UCI Elite rider that faces a weight limitation on their bike of about 15-pounds, you need to look for weight savings elsewhere. In that context, the 100-grams is even more important than a typical no-holds-barred situation. Could we find a way to measure the difference we all wondered?

Turns out there are a bunch of ways and the conversation led us to start talking about the method that the now infamous Dr. Michele Ferrari developed for comparing the rate of ascent of any two riders regardless of when and where they were climbing.

Ferrari used this method, which he calls ‘Velocita Ascensionale Media (in English that’d roughly be Average Climbing Speed), to help Lance Armstrong in the 2000 Tour de France. According to an interview Armstong gave to Cyclingnews.com, "[Ferrari] can tell you how really fast we're riding, based on VAM….…Obviously it wasn't good to let Pantani go, but how fast was he really going? How long could he sustain that? And Ferrari would know the answers, because he is above all, in my opinion, a mathematician. A brilliant mathematician … with a ton of experience."

So, how does VAM work? Well, I was a philosophy major in college for the simple reason that I couldn’t pass chemistry (which seemed to be some kind of math), so I can’t explain the calculation, but someone was nice enough to post a Wikipedia article on VAM here.

It’s actually pretty interesting to compare your own VAM on different climbs that you do on a regular basis. You can also compare yourself on your favorite climb to someone like Pantani railing up Ventoux. Check out the Wikipedia article, I think you’ll figure it out.

Ferrari, whom you can pay to be your coach this very day, has also written extensively about VAM on his own site 53x12.com 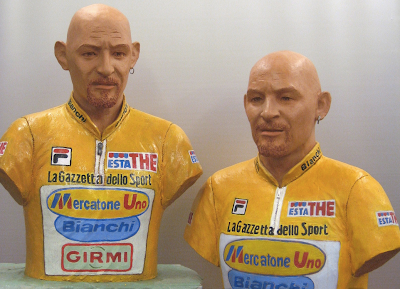 Humor Me, Please…..
Interesting that we’re talking about Marco Pantani as not so many days ago, the world marked the sixth anniversary of his passing on February 14th, 2004.

If I’m remembering this correctly, I was at the Tour de France in 2000 and was sitting in the press room as the riders made their way up to Courchevel on the 15th stage that Armstrong mentions above. The pressroom was quite a long way from the finish line, so I was just going to run out and watch the riders come by and watch the finish on television (preferably with a cold beer in hand).

Pantani was on the attack and it seemed very sudden that he was coming close to where the race would come by the pressroom. There were televisions all over the press room and suddenly Pantani was passing production trailers and buildings in the town that we had seen. A bunch of us jumped out to see him pass. We had of course driven the course that morning and there were so many steep climbs to get to that location and, despite being in the town, the climb at that point was quite steep. All that made me think that Pantani would be in the saddle, just motoring. But he came by where we were standing, on what would be a right-hand bend for him, and he was out of the saddle and in the big ring. It was just mind blowing that someone could ride that far, over that many climbs, in the middle of a three week race and be in the big ring on that steep of a climb. Just phenomenal. Brilliant finale that day.

Clearly a lot of controversy and emotion around Pantani, but he had so much class as a rider. He was so insanely gifted. Too bad he couldn’t fulfill the promise.
Start your Build Since 2006, we've been creating the world's finest dream bikes with a 'beyond category' approach to customer service. Our Custom Program
California Calling You can find us just over Golden Gate Bridge in California's Marin County. Can't come to the shop? We can bring the bike to you. Contact us