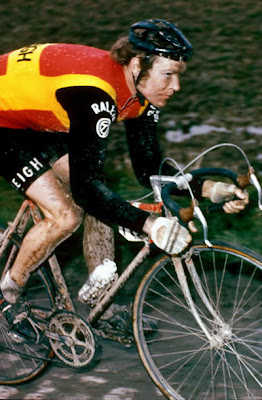 Going to go out on a limb here and make a little claim. Not much of a claim really, but something that’s been bouncing around in my head for a few days. The claim, while not life changing for anyone, is that I raced in the very last race in the United States that leather hairnets (or non Snell/ANSI approved helmets) were legal.

Sure, it may not seem like much, but how many football players can say that they played in the last game before the league started using what most people would call ‘modern’ helmets? How many DJ’s can say they spun the last record before CDs completed their dominance of the airwaves? How many secretaries can say they were the last to send a message via Telex? All I’m really saying is that I was witness to an arcane little piece of history here in our great sport. One that most people either forgot long ago or never knew about.

So what was the final race that riders used a head safety ‘technology’ invented a hundred years prior you ask? It the National Cyclocross Championships back in 1985. I was in my final year as a junior and my team—sponsored by the woeful Huffy Bicycles brand—made the 10-hour drive from Dayton, Ohio to Nutley, New Jersey to cap off a cold, wet season of Midwestern cyclocross racing.

Rumor had spread about the change to the helmet rule late that summer and, while attending a cyclocross camp at the Olympic Training Center in Colorado Springs that fall, we were told the cold, hard truth: That everyone would have to train and race in a Snell or ANSI certified helmet beginning on January 01, 1986. Of course we were outraged. Rules were well and good, but this was somehow a violation of personal choice! Many of us threatened to never race again. All of us threatened to call our Congressman or some other highly placed representative. 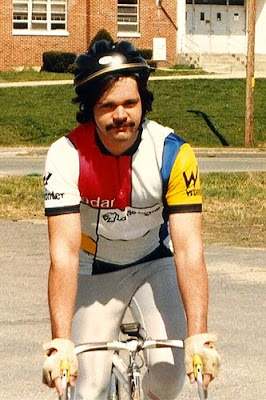 This guy could rock a V1 Pro!

Of course the real motivator behind the outrage was that there was literally not one hardshell helmet that looked good. Not one. There was the Bell V1 Pro and I think a hardshell by the Italian brand Brancale. Other than that it was pretty much hockey helmets and lids used by rock climbers. What was more, no European pro wore a hardshell—why should we? Perhaps because we weren’t European or professional? Hmmm. We didn't seem to realize that at the time.

So, the race went off! All categories at once. Maybe sixty of us hell bent. An hour or so later Paul Curley won what would become one of about six million national championships (check the results from Portland by the way) and Ned Overend finished third maybe—some Polish defector beat The Captain for second—and I finished somewhere behind them. Far behind them.

The next season we all had to confront a new reality. Actually wearing a helmet that might protect our heads. Initially, the bulky, hot, ugly Bell V1 pro was pretty much it. Then some cagey folks had the idea that you could take a Bell helmet made for infants and carve out the entire inside so it would fit the head of a grown adult. Sure it rendered the helmet as useless as a box of matches on the bottom of Lake Erie, but it was a super light set-up. Few riders were bold enough to actually ride in a Baby Bell and the door was left wide open for a better hardshell. Enter the Monarch ‘Tour Guard’. At least I believe that was the model. It was a bit sleeker than the V1 Pro, much lighter and had huge vents. It still looked dorky, but we all thought a little less so.

At some point during all of this, Giro founder Jim Gentes changed the entire game by launching a light, well ventilated and actually kind of cool helmet. By 1987 Giro helmets were the standard and pretty much everyone on this side of the pond had forgotten that hairnets ever existed.

Possibly the bigger shock to the system--and one that would take longer to digest--was that we were actually expected to wear helmets on every ride—not just while racing as we’d done with hairnets. It wasn’t an overnight thing, but within five years there wasn’t a group ride around that didn’t require the use of a helmet. A total change from the previous decade.

In the last few decades I’ve had the bad fortune to use a few helmets for their intended purpose and, although I may not have consciously admitted it at the time, I was damn happy that I hadn’t fallen on a hairnet.

And, for all of those who don't remember when Lemond was skinny and kicked ass.....buckle up your chinstraps!