A Crush On Campagnolo Explained 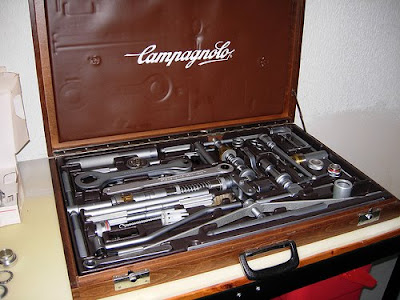 Seems that if you’d never heard of Apple Computer (let alone, seen the ‘1984’ commercial, had a PowerBook 100, first-edition iPod, spent thousands on iTunes, etc.) but happened to walk into one of their stores, put your hands on any of their products and started using it, you’d know that they were both different and, in my opinion anyway, better.

Seems like a lot of people feel exactly the same way about Campagnolo and stuff they’ve been making for 70-plus years. Surely Campy is no Apple. They generally deliver late, are rarely consistent in their marketing between their home country and foreign outposts, have made a lot of products that didn’t come anywhere near their mark (Syncro shifting? SGR clipless pedals?) and seem generally inefficient in their business practices. Yet their design, packaging, history of innovation, crispness of marketing, passion for their chosen subject matter, connection to riders and unrivaled race wins definitely inspires the same kind of dedication.

(Before anyone takes what I said about their products missing the mark the wrong way, I’m a huge supporter of their products. They’ve often led the way in the use of new materials: Early in the game in both titanium and aluminum and one only need to see their Hyperon Ultra Carbon Clincher from 2004 (a wheel that is still relevant a half-dozen years after) to know that their capabilities in carbon fiber outpaced nearly everyone.)

But that technical stuff isn’t what we’re here to talk about. How many people are really motivated by features and benefits one way or the other? Who remembers how many horsepower a Shelby Cobra has or how fast the processor was in the first iMac? What usually gets me (and I’m guessing most people) is some kind of deeper connection. Usually created by some kind of incredible experience or great marketing. When I try to decode my dedication to nearly anything Campagnolo, a bunch of things come to mind: 1034 hubs with their famed QR, the script logo emblazoned on the lid of a Campy tool kit, every Italian pro that ever mattered racing their gear, a Campy alloy freewheel, visiting the factory and having Valentino give me a silver corkscrew.


I love all those things, but the two specifics that sealed the deal between me and Campagnolo are:

The 1982 World Championships poster with Giuseppe Saronni winning at Goodwood, England:
Someone with more knowledge of Campy history that I would know when they started, but Campagnolo use to win pretty much every World Championship. Shimano? SRAM? Not so much. Campy sponsored most of the best teams and got the big wins. Somehow at the age of 14, when I was just getting into riding, someone gave me the poster of Saronni givin’ the what for to some hapless fools trailing in the distance. Saronni didn’t look like he was happy to win, he looked like it was somehow preordained. Of course he won. Who else would? He was Italian and on a Colnago and riding Campagnolo. I spent hours trying to decode all the words on the poster. ‘Vince’ and ‘Vicenza’ are really confusing to a 14 year-old with no context and barely the ability to read. All the better though. It really added to the mystery and mystique. I went on to have maybe a half dozen other Campy World’s posters that I can remember, but none were quite as transformative as that one from ’82. It was like the famed Farrah Fawcett poster it displaced, but in a different way.

By the way, I didn’t see the end of that race and all the controversy that surrounded it until a few years ago. Yet, I think anyone that believes Lemond didn’t take down Boyer for no good reason is plain crazy. This means you John Wilcockson.

The second deal maker with me and Campy was the Campagnolo Alphabet: 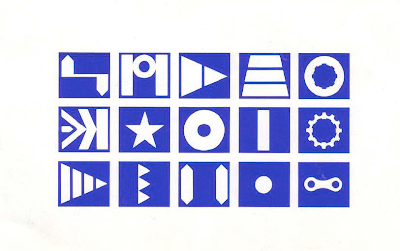 Maybe I’m over thinking it, but it seems to me that the Campagnolo Alphabet came along when an outfit like Campy would’ve stopped thinking of themselves as simply a maker of bike parts and started imagining themselves as something much bigger. It would’ve been about 1986 and Campagnolo made this sudden switch from a traditional, high quality, but lowbrow marketing approach to this very current feeling (even today) and minimal system of icons that would become known as the Campagnolo Alphabet. I wish I knew the story behind it, and I’ll try to make a point to discover it, but, even by today’s standards, the level of execution they exhibited with the Alphabet was amazing. The company carried it through in the packaging and marketing materials for its mid- to late-80’s products, many of which were not as good as the package they were in! Still, the Alphabet stands out to me as one of those things that only a visionary and entirely self-aware company like Campagnolo could produce. Did Simplex ever do something that good? Zeus? Omas? OK. I’ll rest my case at that.