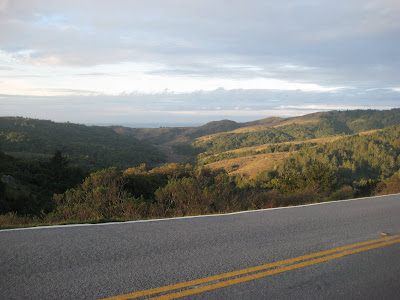 The best view from the world's best one hour loop?

No question that every cycling town has a good, one hour ride (as well as good two, three and four hour rides) and we’ve ridden them everywhere from Santa Monica to Boulder, Charlotte and New York. Still, we have yet to find a better one than our own 15-mile lunchtime loop from Mill Valley to Muir Beach and back.

The reason? It features two 15-ish minute climbs, a ride through millennia old redwood trees and past one of only 100 National Monuments in the United States, a peak at the Pacific Ocean and a road that skirts a picturesque organic farm known as the Green Gulch Farm Zen Center. It’s a ride the defines Northern California.

Truth is, it’s not one specific route, but rather a trip from Mill Valley, over a 1,200-foot ridge, down to the ocean and back again. There are a number of tweaks that you can make to this ride to give it a little extra length, more adventure or whatever you’re looking for.

Should you begin the Muir Beach loop from the shop, you’ll be treated to all of perhaps three-quarters of a mile of flat streets before the climbing begins. Whether you start the route via Molino Ave or through downtown Mill Valley and up through the tiny, winding backstreets that have served as a backdrop for any number of car commercials, you’ll need to dig in for a roughly a 12 to 15-minute climb.

Which route to take though? A simple rule of thumb for figuring that out is, if you’re feeling great then go up Molino (which begins with a leg breaking three or four minute section), if you're feeling less-than-great, wind your way up Throckmorton, to Cascade and to Marion which will spit you out on the main road up to the ridge (i.e. Molino/Edgewood). There’s actually a number of other options for getting up to the ridge, plenty of which involve nice patches of dirt or trails, but you really need to be riding with a local to figure those out.

As you wind your way up to the intersection with Panoramic Highway known as ‘Four Corners’ you’ll be fortunate enough to catch a glimpse or two of San Francisco to the south. As you crest this first climb and come to the Four Corners be very careful. Due to the number of tourists coming out to Muir Woods and the Stinson Beach and Bolinas locals speeding over the mountain, there’s any number of ways to become a hood ornament.

At the intersection, you can either head left on Panoramic Highway or straight down on Sequoia Valley Road. Personally, the straight down option on Sequoia Valley seems to work best. The descent is a little more thrilling than the other option and the climb out of Muir Beach on Shoreline Highway just seems to have a better rhythm than the climb up from Muir Woods—which is steep and irregular.

Assuming you head down Sequoia Valley, hang on for a fun and challenging 1.5-mile descent that literally ends at the entrance to our own National Monument, Muir Woods

Keep your eye out for tourists as you make the final left-hand switchback and head down Muir Woods road toward Muir Beach. Laying in the bottom of a deep valley, Muir Woods Road is almost always a few degrees cooler than the rest of the county and is often shrouded in fog—especially in the months of May, June, July and August. One of my favorite stretches of asphalt, this patch of tarmac road feels pretty untouched by civilization. Shocking considering the financial district of San Francisco is a mere 30-minute drive away. 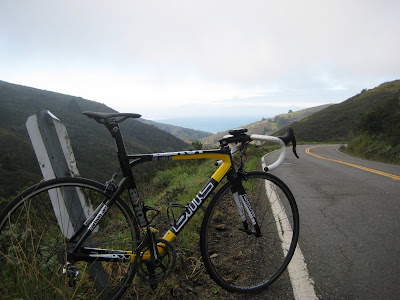 
At the end of Muir Woods Road, you’ll it the ‘T’ intersection with Route 1 or Shoreline Highway as it’s called between Muir Beach and Mill Valley. In the tiny hamlet of Muir Beach you’ll find fog and the Pelican Inn, a perfect reproduction of a 16th Century English Inn. Stopping for a pint at the Pelican is a great idea as long as you have a ride home. The place is so cozy and authentic that it’s just about impossible to have just one pint and it’s even less likely that you’ll want to hop back on your bike for the 15-minute climb home after a few.

A consistent climb on a nicely paved state highway out of Muir Beach takes you back to the ridge above Muir Woods. The climb is steady and well timed glimpses to your rear will give you a perfect view of the curved beach you’re riding away from. As this climb comes to its peak, you can make a left on Panoramic Highway, which will take you up to Four Corners or you can drop down Shoreline Highway which will take you into the Tam Valley section of Mill Valley. Either way you go, there’s lot’s of traffic on weekend days, but, thanks to the endless twists and bends in the road, the cars, buses and motorcycles are usually moving at a reasonable rate of speed—often slower than a good cyclist.

Be sure to take a last look before plunging back down toward the bay and where you started in Mill Valley between 45-minutes and an hour ago. Once finished, you can head downtown near the shop for a coffee at Peet’s, a gelato at CiCi or an Indian burrito at Punjabi.

That’s our favorite one hour ride. We know you’d love it and hope you’ll come to Mill Valley to check it out some day.