Puttin' The Funny In Funny Bike 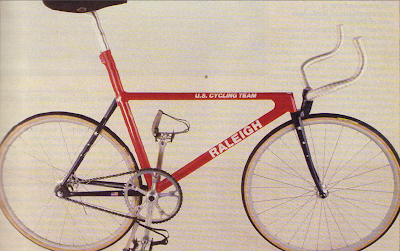 Headed south of the border with Easton’s Tom Larter and Chuck T. last week to see the carbon factory in Tijuana. Incredible to see all the handwork that goes into making something seemingly as simple as a bicycle rim. Multi-part molds, pleated bladders, composite material that have been to Mars, variable nipple beds. Yes. All that.

At any rate, Tom, Chuck and I get to talking over dinner. Turns out that Chuck started racing way back in the 1970’s and was a mechanic with various National and Olympic teams back in the 80’s. He was there when Moreno Argentin whipped Charlie Mottet with a car antenna to win the ’86 Worlds in C Springs and has a memory for equipment like nobody. Need to know about High-E hubs? Saavedra hand rolled rims? Ishiwata aero tubing? Chuck not only knows the details, he probably has it stuffed in his garage.

At some point the subject got to the time back when Raleigh (Raleigh of Nottingham, England) was owned by Huffy and they sponsored the US National Cycling Teams. That started around 1982 or ’83. Coincidentally, that was about the time I moved to Dayton, Ohio to finish high school. Turns out the ‘Raleigh Tech Center’ where they created all the cutting-edge team bikes was located at Huffy’s headquarters in Dayton (actually Miamisburg if anyone is checking) and the local team was of course sponsored by Huffy/Raleigh. Being a penniless kid, I wanted to milk as much as I could from the local sponsor, so I’d go out and see Mike Melton, the guy running the Tech Center to beg for equipment. Mike would flow me English-built Raleigh frames (including a 753 cross frame that’s still hanging in my garage) and sell me Campy parts for next to nothing—I think it was $25 for a Super Record rear mech—and even loan me the first disc wheel that anyone had ever seen (it was said to be from Francesco Moser, was aluminum and weighed six pounds). Incredible hook-up for a hopeless junior racer.

On my visits Mike would show me the stuff he was working on and, being from South Carolina, he’d take the time to tell me hilarious stories about frames freezing and cracking in the cargo holds of airplanes and guys ripping custom handlebars apart. Great stuff. Not sure if anyone other than Chuck and I remember, but the bikes they were building at the Tech Center were mental. Even by today’s standards, the stuff was wildly cutting edge.

For the ’84 Games, they developed 24” wheeled pursuit bikes that weighed just over 10-pounds and had ultra-skinny, 5/8” headtubes, cut down front and rear hubs, 65-gram tires, 100-gram aero rims, aero spokes, totally custom titanium ‘clipless’ pedals. Stuff that people just hadn’t used at that point (well, except for the Cinelli M71 pedals that had been around since the 1970’s). Aero helmets with built-in radios? Everything was custom and insanely expensive.

That got my mind turning over. So, I looked around the internet and found a scan of a good article on the FirstFlight bikes site. As tough as it might be for people that recently started riding to belive, America was not the leader in bicycle technology or quality. Thanks to Melton and the guys that were working on that program (and the openness of the riders to try all this stuff), America went from not even being in the room to running the show in terms of bicycle tech. The Ohio-built bikes delivered at the LA Olympics with a haul of medals for the home team that has not ever been matched.
Start your Build Since 2006, we've been creating the world's finest dream bikes with a 'beyond category' approach to customer service. Our Custom Program
California Calling You can find us just over Golden Gate Bridge in California's Marin County. Can't come to the shop? We can bring the bike to you. Contact us