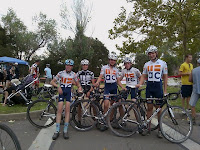 In the kick-off of the Northern California cyclo-cross season, the Above Category Junior squad left little question that they'll be the team to beat with a win and five total riders in the top ten spots. The race at Negro Bar State Park near Folsom was one of the first of 13 events at Folsom's Cyclebration bike festival which took place over the course of the weekend.

AC's Julian Eisen crushed the Junior field while Jack Keane doubled down after his B Race top-ten for a second place.

In the Women's B Race Meg Siegel, riding her first ever cross event, slotted into fourth and AC dad Rich Siegel claimed 16th in the Men's B field.

Follow this link for a gallery of pics from the weekend's outing.

Next weekend, look for a proper season kick-off on Sunday, September 20th with an AC cyclo-cross skills clinic taught by the man, the myth, the cross legend Clark Natwick. Skills camp begins at 1:00PM sharp in Mill Valley (location TBD) and there'll be a proper Taco truck dinner for athletes, our families, AC shop crew and elite team later in the afternoon. Please call the shop for information.

The AC Junior team is sponsored by: FOCUS Bicycles USA and Edge Composites.